This article is about the change in mannequins from the 1960’s to today. It was written by Tove Hermanson, editor of the Costume Society of America. The history of  mannequins prior to 1960, is here.

The sexual revolution, the civil rights movement and the recession of the 1990’s all impacted what type of mannequins were displayed in store windows.

The revolutionary ’60s came as a shock to the world, the American youth rebelling against the traditions of their conservative parents who desired normalcy and stability after the chaos of WWII. The FDA’s approval of birth control pills in 1960 beckoned the sexual revolution; free love challenged the marriage-monogamy favored in the ’50s, women took charge of their bodies and their careers outside the home.

After the post-war homemaking scenes enacted in ’50s storefronts, the next generation of mannequins aimed to capture real women rather than idealized versions of them… to a greater extent, anyway. Adel Rootstein’s company produced mannequins based on living, iconic people such as Twiggy (seen below), Patty Boyd, and Sandy Shaw, creating a secondary kind of functional pop art. 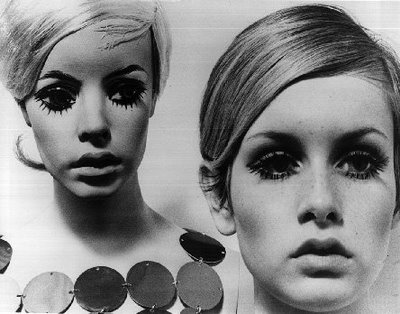 These mannequins were designed with increasingly kinetic stances, reflecting the growing obsession with youthfulness and freedom of movement (this could include freedom of professional sphere as well as freedom from more restrictive garments).

As short and mod ’60s fashions evolved to the long, flowing, backless or see-through styles of the ’70s, structured bras were worn less by live women and mannequin nipples more realistically displayed these braless styles. Capitalizing on the “natural” look, VIVA Lingerie even had a nipple bra that had padded nipples with the “support you want” (hilarious!):