Urban Myth #1 – Mannequin parts  are not moveable
Since most mannequins are made of fiberglass or a similiar material, they are not going to be bendable or posable into other positions.   Think  life-sized Barbie Doll, but with even less flexibility. With a Barbie Doll you can move the legs back and forth to pretend as if Barbie was walking. But on those few mannequins where the legs do move back and forth, they will not stay upright on the stand if you try to put them in a different position than the one intended by the manufacturer.

There are some exceptions to this rule and that is with mannequins that are made out of cloth or foam rubber.  This style of mannequin is used quite frequently at   children’s clothing stores like The Baby Gap and Gymboree. Typcially they are headless and those with heads do not have realistic features.

There are also speciality mannequins made of fiberglass that have articulated arms which bend. These  are popular with trade-show exhibitors who want to have the mananequin hold something (fire hose for example) or appear as if he fixing or building something.

In addition to two  these styles of posable mannequins, we carry a hybrid mannequin – it has a cloth body and a realistic face. (see below) It was originally manufacturered as a headless cloth mannequin and a realistic face was attached to it – that is why it has such an elongated neck. But for a customer who wanted to hang the mannequin on a flying trapeze, this was perfect. Available in both a male and female version.     I will elaborate on the other Urban Myth’s about mannequins in future posts. 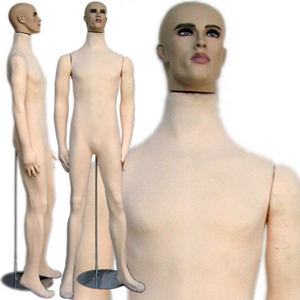 Realistic Mannequin that is Bendable