These mannequins may look like they are nude sunbathing but they are waiting for their photoshoot from Bikini Help. Bikini help is a website that showcases the hottest looks in bikini fashions and all features everything you wanted to know about bikini’s. They did a photo shoot with the two realistic seated females mannequins they purchased.

There is reason why Baywatch was such a popular show. So if you want to sell more swim wear, you gotta add some “Baywatch” appeal to your display – and the best way to do that is with a mannequin who looks like a Baywatch babe. We have a bunch of different mannequins in this style – some standing, some reclining, some seated, some with huge boobs – but all of them are hot.

People buy more when their emotions are stimulated. Make sure your retail displays sell emotion, not product. The towels and inflatable tubes give the scene a touch of realism, which further stimulates the emotions.

And if these were in a store window instead of online, you could use the Baywatch Babe style mannequins to display ancillary items that you sell. Put a pair of sunglasses on her, an Ipod in her hand, a stack of towels underneath her other hand, a basket beside her with sunscreen, magazines, Ipod, snacks etc.

This makes the scene in the window look like a realistic beach scene – versus a window display with products stacked in the window. 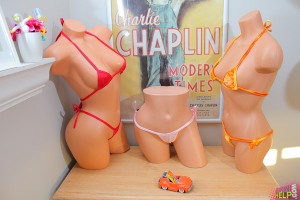