Do you recognize this scene? 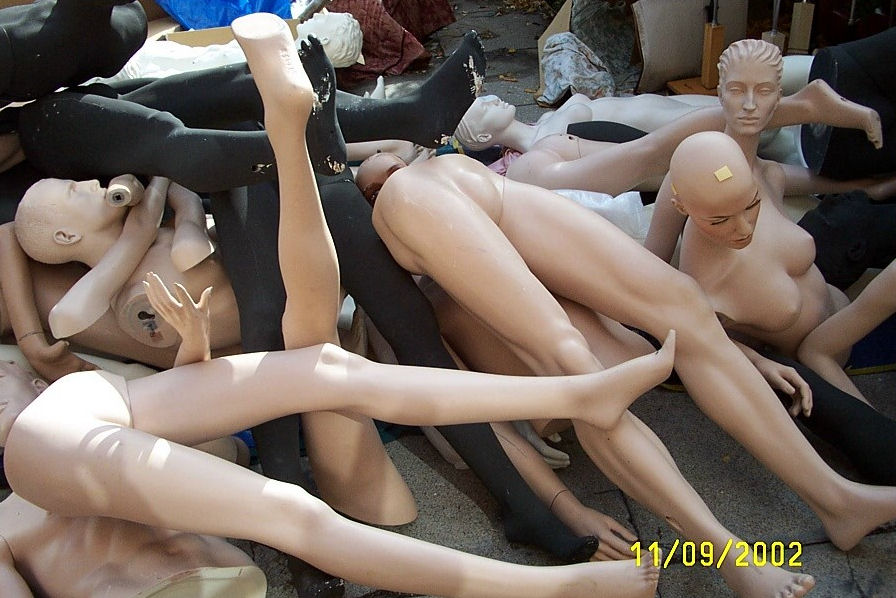 There is more pressure than ever for large retailers to be socially conscious. Mannequin Madness helps retailers balance being a good corporate citizen without sacrificing profits.

We have assisted retailers such as Nike, Bebe, Nordstrom, Talbots and Juicy Couture reduce their environmental footprint while putting more green in their pocket at the same time.

We saved Bebe an average of $3,000 per store when they remodeled or closed their underperforming stores in 2010.

Let’s look at a before and after scenario.

Retailer calls a waste removal company to bring a large (cause mannequins are big) dumpster on the premises so the store personnel can put the unwanted mannequins in.  Average cost of a dumpster $800 a day.

Store personnel removes mannequins/props/fixtures from the store, takes them to loading dock and places them into the dumpster. Salaries of staff must be paid.

If the store is remodeling, typically the new display products are often installed after hours when the store is closed. They want the old stuff removed at the same time – which can result in overtime fees paid for both the store personnel and the waste disposal company.

Waste removal company breaks up the mannequins into smaller chunks to make it easier to send them to the landfill. But mannequins are made of materials that do not biodegrade – so they don’t belong in landfills.

Retailer calls Mannequin Madness and gives them locations where they will be getting rid of visual display products.

Mannequin Madness has affiliates all over the US, Canada and Europe that we can deploy to retail stores and remove the visual display products at NO CHARGE to the retailer. In many cases we can deploy our affiliates to pick up the products before the store opens or after it closes  – also for free.

The visual display products are resold or rented to other customers (non-profits, private individuals smaller retailers)  many of whom could not afford to buy brand new products.

Reduce, Recycle, Reuse – has never been easier for retailers. In return they get a tremendous opportunity to brag about being a good citizen that both their shareholders and community at large will appreciate.

Mannequin Madness recycles over 100,000 pounds of mannequins a year. The Environmental Protection Agency (see photo below) gave us a special achievement award for our mannequin recycling initiatives back in 2003. So we’ve been doing this long before the term green retailing became popular and we have a lot of experience.

If you plan on remodeling your store or know someone who is, give us a call at 510 444-0650  or send us an email at sales@mannequinmadness.com

Our mannequin affiliate partner in the UK that we met face to face in 2009 courtesy of British Airways.

where can i purchase some of the recycled mannequins/ fixtures from stores who have remodeled or who have simply called Mannequin Madness to have their mannequins or fixtures removed.