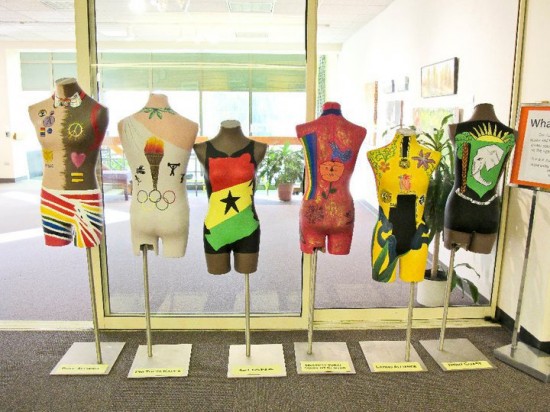 Old mannequins make a marvelous canvas for art projects. And the students at the College of Lake County in Illinois had an opportunity to showcase this with old mannequins recycled from a Banana Republic store.

Mannequin Madness Our company recycles mannequins from The Gap, the parent company of Banana Republic and this is an example of the many ways that we extend the life of mannequins that were destined for the trash.
Following in the footsteps of popular public art displays like Chicago’s “Cows on Parade”,” CLC’s “Student Bodies” is a representation and celebration of campus diversity created by the members of various student clubs and department.

In designing the mannequins’ artwork, “We wanted to showcase a non-verbal way to communicate the activities and aspects of the multicultural clubs,” said Bob Lossmann, chairman of the CLC art department and PTK advisor.

The idea for “Student Bodies” was the brainchild of CLC public relations specialist Diane Rarick and her Grayslake neighbor Cindy Trabulsy, an assistant manager of the Banana Republic outlet store at Gurnee Mills.

When the store got new fixtures and mannequins, the old mannequins needed to go. Recognizing the mannequins’ many uses, CLC happily accepted the donation.

“Banana Republic is passionate about recycling and giving back to the community,” said Trabulsy. The end result is a “win-win,” said Cindy Sarkady, CLC assistant director of student life. “These (mannequins) would have gone in the Dumpster.”

All of the “student bodies” can be seen on the Banana Republic Facebook page. Eventually some of them will be auctioned off to raise funds for organization depicted on the mannequin. 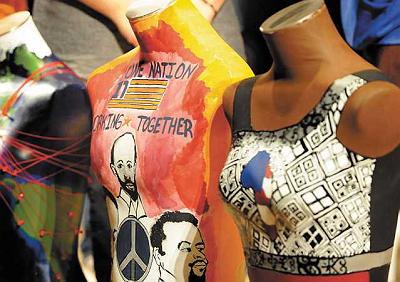 We have a bargain bin at the Mannequin Madness warehouse in Oakland with miscellaneous mannequins similar to these for local artists and student groups to purchase at discount prices.

Hello my loved one! I want to say that this article is awesome, great
written and include almost all vital infos. I would like to see more posts like this .