In Western movies the general store was the ONLY place in town to buy goods for miles around. So retailers did not have to put any effort into making their window displays look enticing. Just having something in the window was enough.

Although times have changed, many retailers lose opportunities to generate more sales because their window displays lack imagination and pizazz, just like those in the western movies. Eye catching window displays, don’t have to be expensive just creative! (and well executed which is why a skilled visual merchandiser is helpful)

Look at how creative this window display where besides the dress form the only props are dirt filled ziploc bags with fresh flowers growing out of them.

Retail window displays are like a giant billboard announcing to everyone who passes by what you have inside. Simply putting the items you are selling into your store window is not enough to grab people’s attention anymore, you have to engage them. Good lighting, props, signage and mannequins are all tools to create engagement.

Nothing beats a full size mannequin with arms, legs (and preferably a head) for engaging the attention of passerby. But dress forms are more economical to buy than a mannequin and are much easier to dress and maintain. So if you use dress forms, this means the items on it or props surrounding the dress form have to be more significant in order to draw attention. We sell a wide variety of new and used dress forms at Mannequin Madness. 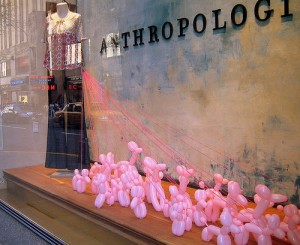 We saw some excellent examples of creative uses of dress forms from one of our favorite blogs, Retail Details. Becky Tyre, a visual consultant and owner of Swirl Marketing, writes the blog and if you ever need inspiration for coming up with creative ideas to make your store more visual appealing, read her blog or hire her as a consultant. Many of the photos in this post are from her blog.

Anthropologie is THE industry leader for imaginative retail displays on a budget. We salute them for helping to promote the same concept that we we’ve being saying over and over again “: eye-catching window displays do not have to be expensive to produce (just well executed). Anthropologie has made an art form out of using re-purposed items (Now if only we could get them to buy our re-purposed or eco-friendly mannequins )

Old doors make a wonderful backdrop to make dress forms stand out in a window, which is was Boogaloos, a retail store in Georgia did.

Dress Forms aren’t just for clothing retailers. Couture 360 a hair salon in Lake Zurich, Illinois used a dress form to create a “dress” on the mannequin made out of their store gift cards. This resulted in an increase in their gift card sales. 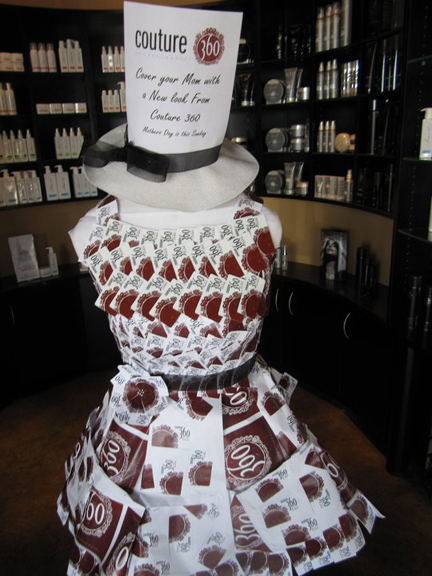 Many florists and nursery centers use dress forms to create a “floral dress”. These are from the Philadelphia Flower Show.