These eye-catching window displays were created by Chad Morrisette a visual merchandiser at CM Squared Designs in West Hollywood.

West Hollywood is second only to “The Castro” as the gay capital of world and many of the retailers he works with are located in areas populated by entertainment industry folk. This is code for saying Chad has MUCH more liberty to create edgy displays, than your average window dresser.

Besides the great props used in all of these window displays, check out the great poses on the mannequins. Mannequins standing upright in a military type pose which that many stores default to using is SO uninteresting. Chad has been a customer of ours, buying many of our high end mannequins that we have recycled from retail stores. 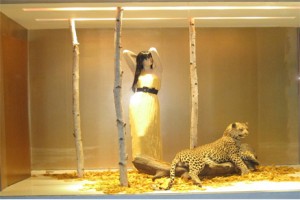 Whether Chad has a visual merchandising show or Mannequin Madness has one, we say it is about time for some real talent and creativity on reality tv! Enough with the Housewives of …..(fill in the blank) which is nothing but a grown up version of mean girls from high school.