According to an article in the Huffington Post, the most brilliant use of the pop-up concept is taking place in downtown Oakland.

It is called Popuphood and involves giving six new retail shops in five previously vacant storefronts six months of free rent. The goal: to revitalize the neighborhood while giving retailers a chance to get on their feet. Popuphood, has enabled an entire vacant block in Oakland to be filled with businesses. As a result much needed foot traffic is coming into the area, sales revenue is being generated for local businesses (which the city will gladly tax) and this neighborhood looks appealing instead of blighted.

Pop up shops were initially started by large retail chains launching new products or promotional events. Although these pop up shops may have been in a vacant retail space, it was vacant space in a busy and vibrant shopping area with lots of existing foot traffic.

But the PopupHood concept is for small business owners – many of whom do not have brick and mortar stores. And they are located in areas that typically had no foot traffic – perhaps even a blighted area.

We LOVE this concept. We love it so much that we offer deeply discounted rental rates for retailers participating in PopupHood. We know that having retail displays that are visually appealing generates more sales for retailers. (Pass by a Ralph Lauren or Anthropologie store to see stellar examples of visual appealing displays)

These are our mannequins in the window that Oakland Grown, a non-profit organization supporting independent local businesses, had during the Xmas holidays. The display was in an empty storefront provided by PopupHood. Don’t you think the mannequins make the window display more appealing? They sold a lot more t-shirts as a result of having them displayed on mannequins than they would have otherwise. 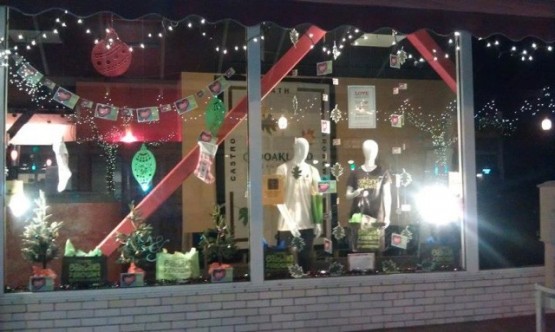 According to this article about PopupHood in the New York Times: “These days, a pop-up experience can mean anything from a seasonal Toys “R” Us store to a $60 one-time-only meal prepared by a guest chef at a high-end restaurant to a makeshift art gallery in an alley. Some pop-ups mix big corporations with independent operations. For business owners, an uncertain economy has driven the form. Pop-ups frequently function as trial balloons for brick-and-mortar businesses, testing concepts with less financial risk.” Popuphood functions as kind of an incubator for the new economy, rethinking the way retail works as a way to survive. Many of the retailers

To see some of the types of stores currently involved in PopupHood, check out these articles in Daily Candy and 7×7 magazine.