Share
Share on Facebook Share on Twitter Pinterest Email LinkedIn
In Milan, British designer Vivienne Westwood turns the mannequins in her store window into victims of domestic abuse — giving them black eyes and bruises. She did it to raise awareness of a growing problem of domestic abuse in Italy. And to encourage women to not be silent and take it like a mannequin but to DO SOMETHING.

Her window displays brought created a flood of publicity which you can watch on this video here:

It is rare for a designer or major retailer to use their window displays as a platform to bring attention to a social issue. We had seen quite a few use their windows to take a stand to promote
gay marriage. But I think that is only because a large majority of fashion designers are gay men.
With the exception of the occasional pink ribbon in the window for breast cancer month, social issues that impact women exclusively are not seen in window displays.
So we applaud Vivienne Westwood for being a trail blazer. And she is 71 and still going strong designing clothes worn by celebrities and wanna be celebrities. She is the one who designed the dress that Carrie Bradshaw wore in the wedding where she was jilted by Mr. Big.  Her is Vivienne in her trademark flaming red hair. 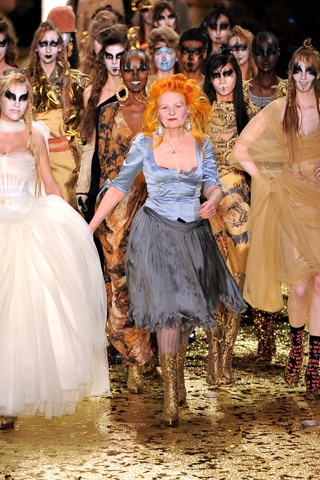