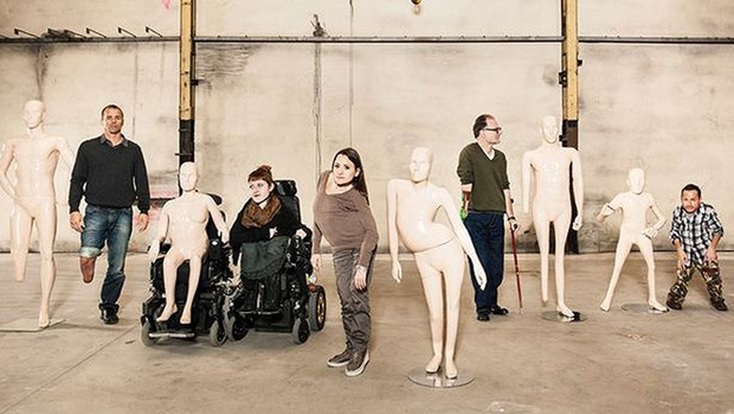 It’s no secret that the smooth, plastic bodies staring out of store windows aren’t true physical replicas of the people who stare back at them. But there’s no reason they can’t be.

At Mannequin Madness we have been blogging for years about the need for more diversity of mannequins in shop windows. They all have perfect bodies and all tall, slim, anglo and youthful looking – all over the world.

A few years ago Kohl’s made headlines by having some mannequins in their stores that were in a wheelchair. Now a Pro Infirmis, an organization for the disabled created a series of mannequins based on real people with physical disabilities.

And the mannequins were placed in shop windows in Switzerland.

The beautiful process was documented in a video (see below) capturing the joy of the models seeing their own unique figures recreated for the first time. But the best part of it all is that the mannequins were actually placed in store windows today, filling the shopfronts on Zurich’s main downtown street, Bahnhofstrasse, in honor of International Day of Persons with Disabilities today.

“Seeing it there for real is quite a shock,” said one of the video participants. And that’s exactly the point. Raising awareness of those with disabilities, specifically in the realm of fashion, is a conversation that’s already begun with groups such as Models of Diversity, which aims to bring models of all shapes, sizes and colors to the fashion runways and media.

Outspoken individuals like Kelly Knox, the winner of BBC’s “Britain’s Missing Top Model,” and Angela Rockwood, who returned to her modeling career with a Nordstrom campaign after becoming a C4-5 quadriplegic, have also made their voices known.

Some stores have made concerted efforts to include body diversity, including those with disabilities, in their ads. Nordstrom has been doing so since 1991, while British department store Debenhams made headlines earlier this year with a Spring 2013 look book that featured a woman who was an amputee.

It’s still an uphill battle to make the mannequins in store windows reflect the shoppers passing by. But the Swiss stores who participated prove that it can definitely be done. The video is truly heart warming.

This is such a great story and the video is lovely. It’s wonderful to see retailers celebrating diversity in such a high profile way with these mannequins in their windows. Lets hope others start to follow suit and we see more of this in more shops all over the world!