All over the world, mannequins create impossible standards of beauty for real women to live up to. 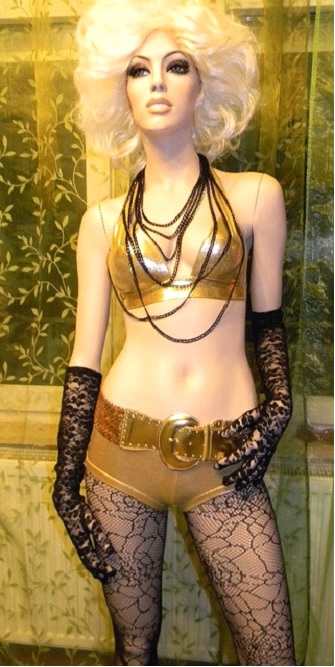 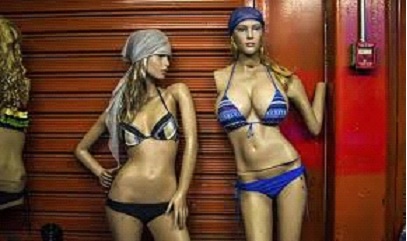 The article below is from the New York Times is about the increase in plastic surgery among women in Venezuela as a result of one mannequin manufacturer. The manufacturer wanted to increase his sales, so enlarged the proportions of the mannequins’s breasts. 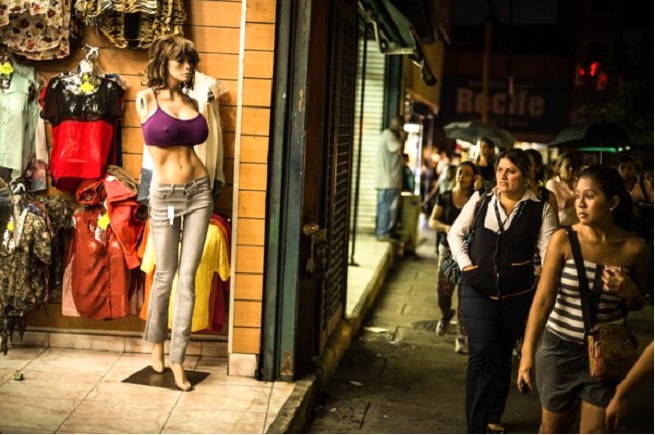 VALENCIA, Venezuela — Frustrated with the modest sales at his small mannequin factory, Eliezer Álvarez made a simple observation: Venezuelan women were increasingly using plastic surgery to transform their bodies, yet the mannequins in clothing stores did not reflect these new, often extreme proportions.

So he went back to his workshop and created the kind of woman he thought the public wanted — one with a bulging bosom and cantilevered buttocks, a wasp waist and long legs, a fiberglass fantasy, Venezuelan style. 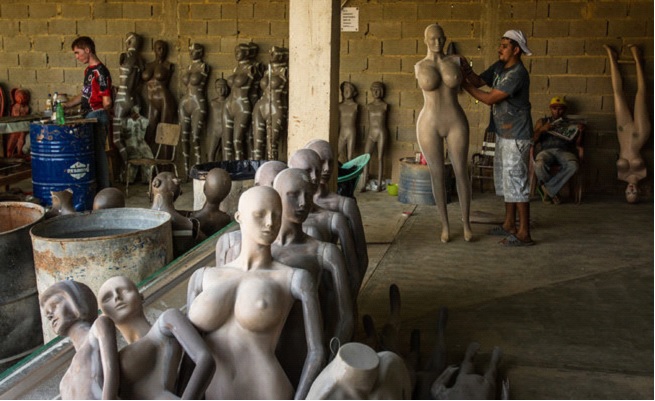 The shape was augmented, and so were sales. Now his mannequins, and others like them, have become the standard in stores across Venezuela, serving as an exaggerated, sometimes polarizing, vision of the female form that calls out from the doorways of tiny shops selling cheap clothes to working-class women and the display windows of fancy boutiques in multilevel shopping malls.

Mr. Álvarez’s art may have been meant to imitate life. But in a culture saturated with such images, life is returning the compliment.

“You see a woman like this and you say, ‘Wow, I want to look like her,’ ” said Reina Parada, as she sanded a mannequin torso in the workshop. Although she cannot afford it, she said, she would like to get implant surgery someday. “It gives you better self-esteem.”

Cosmetic procedures are so fashionable here that a woman with implants is often casually referred to as “an operated woman.” Women freely talk about their surgeries, and mannequin makers jokingly refer to the creations as being “operated” as well. Mr. Álvarez’s wife and business partner, Nereida Corro, calls her best-selling mannequin, with its inflated proportions, the “normal” model.

The embrace of plastic surgery clashes with the government’s socialist ideology and frequent talk of creating a society free of the taint of commercialism. Venezuela’s longtime leader, Hugo Chávez, who died in March after 14 years in office, railed against the procedures, saying it was “monstrous” that poor women were spending money on breast surgeries when they had trouble making ends meet.

But the same resource that the government relies on — the world’s largest estimated petroleum reserves — has long fed a culture of easy money and consumerism here, along with a penchant for the quick fix and instant gratification.

“Venezuela is known for its oil, and it’s known for its beauty,” said Lauren Gulbas, a feminist scholar and anthropologist at Dartmouth College, who has studied attitudes toward plastic surgery in Venezuela. “That ties into why it’s perceived as so important to Venezuelans.”

Beauty took on a particularly important role in the late 1970s and ’80s when the country’s beauty queens, already a national obsession, were crowned Miss Universe three times. Their success on the international stage took on special resonance. It came as the country was grappling with the frustrated expectations of the 1970s oil boom and the deep economic downturn that followed, bringing with it a crisis of national confidence.

And the beauty queens’ fame helped fuel a fascination with cosmetic surgery and procedures like breast implants, tummy tucks, nose jobs and injections to firm the buttocks.

Osmel Sousa, the longtime head of the Miss Venezuela pageant, takes credit for the trend. He recommended a nose job for Venezuela’s first Miss Universe, which he says made her victory possible more than three decades ago.

“When there is a defect, I correct it,” Mr. Sousa said. “If it can be easily fixed with surgery, then why not do it?”

For Mr. Sousa, beauty really is skin deep: “I say that inner beauty doesn’t exist. That’s something that unpretty women invented to justify themselves.”

Naturally, not everyone sees it that way. Several women’s groups protested against the Miss Venezuela beauty pageant last month, criticizing pressures on women to conform to the artificial aesthetic.

The little data available indicates that Venezuelan women do not get plastic surgery more than their counterparts in many other countries. But Ms. Gulbas, the anthropologist, said the surgeries take on an elevated status thanks to the importance of beauty here and a belief that cosmetic procedures will help project a successful image.

“There’s this notion in Venezuela of ‘buena presencia,’ ‘good presence,’ ” she said. “That communicates that you have certain aspects that say you are a hard worker, a good worker, an honest person.” She added, “There’s a virtue associated with looking a certain way.”

Each day, Yaritza Molina arranges several mannequins at the entrance to the small clothing shop she manages in Coro, a city in western Venezuela, always careful to place two ahead of the others. “These are the princesses,” she said, “because they have the best bust.”

As in many countries, there are dangers to the obsession. Over the last two years, the local news media has reported several cases in which women died after receiving faulty injections meant to firm up their buttocks, often in unlicensed clinics.

The jump in sales provided by the large-busted mannequins allowed Ms. Corro and Mr. Álvarez to build a new workshop this year, where they are made by hand in a surprisingly low-tech process.

Dozens of partly finished mannequins stood in neat rows, like silent robots with overblown chests, taking the exaggerated female aesthetic that predominates here and pushing it to its furthest limits.

On a recent day, about a dozen people were at work. Some applied a thin coating of a brown pasty resin and fiberglass strips inside molds, left it to dry and then pried out the artificial torsos, arms, and the fronts and backs of plastic bodies. Others glued the mannequin parts together, spray-painted them or set finished mannequins ready for delivery in the back of a pickup truck, with the words “Jesus is my peace” written in large letters on the windshield.

Yucca and corn grew in small farm patches nearby. From a house across the street, the face of Mr. Chávez peered out from a poster left over from last year’s election. It seemed to peep over the wall at the inflated female forms inside the workshop.

Ms. Corro, the co-owner, explained the changes in the mannequins over just a few years: bigger breasts, bigger buttocks, svelte waists. Until recently, “the mannequins were natural, just like the women were natural,” she said. “The transformation has been both of the woman and of the mannequin.”

Mary Angola, another mannequin maker in Valencia, said that older styles came from Europe or the United States, and hardly reflected the physiques of real women around her.

“They make them so skinny,” she said.

A few miles from Ms. Corro’s workshop, workers used a similar process to build mannequins in a small rooftop workshop run by Daniela Mieles, 25, and her family.

While Ms. Corro’s mannequins took a quantum leap in body shape several years ago, Ms. Mieles said that the busts and buttocks of her family’s mannequins had grown gradually to keep up with the trends in plastic surgery.

Now they have reached a shape that her husband, Trino Colmenarez, 32, calls “estrambótico,” a word that may be best translated as “extravagant.”

Sales are good, and Ms. Mieles said that she and her husband had started saving money so that she could get breast implants herself. An operation at a private clinic can cost about $6,350, Ms. Mieles said, an amount equivalent to about three months of basic expenses for her household, including food, utilities and other living costs.

The goal is to look more like the artificial ideal projected by her family’s mannequins.

“Beauty is perfection, to try to perfect yourself more and more every day,” Ms. Mieles said. “That’s how people see it here.”