The graphic above means: recycling mannequins saves money and reduces the environmental footprint made by the retail industry.

When retail two chains were remodeling stores last month they contacted Mannequin Madness to recycle their unwanted mannequins. And retailers in Europe are doing the same thing by calling our friends at, MannakinLtd in London. Here is a pile of mannequins they received from just one store! 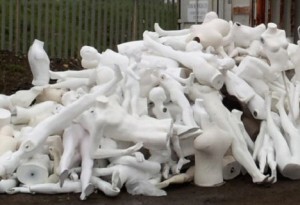 The average cost of a renting a commercial dump bin runs $800-$1,000  – A DAY.  So the cost to throw big bulky objects like mannequins, adds up pretty quickly. In the case of one retailer, they had over 200 stores they were remodeling each with an average of 15 mannequins.

Most retailers say they save anywhere from $3,000 to $5,000 a store when they contact us instead of a waste removal company. That is the type of “green” that gets them more excited than “being green” doing the socially conscious alternative.

Retailers face unique challenges when it comes to managing waste and recycling. The current regulatory environment requires that retailers comply with specific environmental regulations that were traditionally focused on the manufacturing sector

We make it easy for retail chains to recycle – one phone call to us and we deploy our team of affiliates who can pick up the mannequins almost any place in the country. 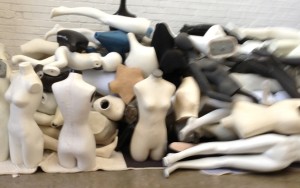 One of our team members in Florida sent us this photo of their receiving area after they picked up mannequins from multiple  stores throughout the state. This scene was duplicated a multiple locations throughout the country. 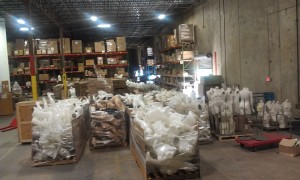 When we first started offering retailers the option to recycle mannequins back in 2001, Nordstrom was one of the very first major chain to sign on.  At least their west coast stores did. 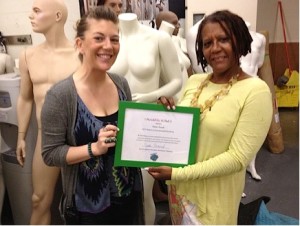 That’s me on the right presenting Jamie Powell, visual merchandiser at Nordstrom San Francisco, with our Environmental Excellence Award. This is an award we give retailers who recycle a minimum of 100 mannequins in a year.

While we have served over  23 retail chains, we would like to add more names to our client list. Any suggestions or referrals?