Mannequins are like supporting actors and the clothing they wear are the star of the show. An ugly mannequin can detract from the clothing, just like inexperienced cast members can ruin the show no matter who the lead character is.

Rootstein mannequins are the “super-models”in the mannequin industry. They are the brand seen most often in the windows expensive clothing stores. Their mannequins are beautiful, as they are modeled after real life super models. 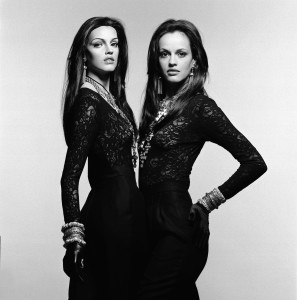 And their manufacturing process is unique, much of it handmade. A brand new Rootstein can cost upwards of $1200.

If this is out of your budget, you might want to sign up for our Rootstein alert that send out to collectors whenever we have a pre-owned Rootstein to sell. They get first dibs before we post them on our website. We sell them from $250- $400 depending upon the condition. What our collectors don’t buy up first, we post here.

Here is a profile, of Kevin Aprino the former creative director at Adel Rootstein who talks about why Rootstein mannequins are so special. 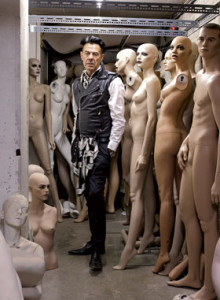 I’ve never been scared working with all the figures in our mannequin factory. It isn’t spooky but some people say they’d find it disturbing to find life-size models at every turn. Mind you, I won’t have any in my house. As far as I’m concerned, my model friends belong here until they go out to showrooms. There are about 500 different styles in our range and I know each one by name because they are based on a real person. We pay models to come and sit for us – two hours a day, for up to four weeks. About 80 per cent of them are women but there are men too.

My career started in 1983. Adel Rootstein set up the business in London back in 1959, when mannequins looked like frumpy mums. She was a window dresser and had the idea of creating mannequins based on celebrities. The most successful was Twiggy, who sat for Rootstein in 1966. Adel brought youth culture into mannequins and it was a huge hit.

Adel didn’t go to college when she was younger and one day she just announced that she was going to art college, and I was asked to take over. Sadly, Adel passed away in 1992, the day before her degree ceremony. Now, at 59, I’m the creative director. We sell 10,000 mannequins a year, with factories in New York, Tokyo and here in Chelsea. It’s possible to buy very cheap mannequins from China but ours are handmade by craftsmen, which is why they cost £850 each.

During the past 30 years I’ve invited many famous models to sit for us. Coco Rocha, Dianne deWitt, Erin O’Connor – they’ve all posed in our studio. The top names in the business do it because they want to. It’s their little bit of immortality. Models are used to holding a pose and come alive when they enter our studio, just like they do on a catwalk. The walls outside my office are covered in their photographs and it feels like we are one big family.

Every model asks me if we can change something about their mannequin because they want to look perfect. They always turn up in peak condition; the boys sneak to the gym to get a better six-pack. The girls usually ask me if we can make them taller.

I find the modelling process fascinating to watch. Each clay casting is made on a life-size, wire armature. Our sculptors build the cast up until they have an exact replica of the model sitting in front of them. Once finished, the arms and legs are unceremoniously cut off to make it easier to move them, then a plaster cast is pressed using the parts from this clay mould.

The original clay model is broken up afterwards, ready for the next sitting. Sculptors like to work their own clay over and over again because they believe the natural oils from their hands are added to the mix. They can get very cross with me if I ask them to use somebody else’s clay – it’s just not the done thing.

Unfortunately, there was a big fire at our factory in 1969 and a lot of moulds of the early models were lost. Now, when I am out shopping or visiting clients, I always nose around to see if there are any missing mannequins I can buy back for our collection. The one I am always trying to find is of a model called Imogen. It was the second mannequin Adel ever sold.

Whenever I think a mannequin has gone out of favour, it comes back in vogue again. Fashion doesn’t change very much, only the people in it. If you live long enough, your clothing and shape will always come back into style. That’s what I tell myself, anyway.

Sadly, window dressing itself is a bit out of fashion. Many of the big stores no longer have display departments, which is bad for the fashion industry as a whole. Without the correct skills, it’s easy to make a mannequin look quite terrible.

I was once a model myself and Adel did offer to make a mannequin of me. I still regret that I turned her down, but I’m way too old now!