If you are looking for a sewing dress form this guide contains information compiled from multiple sources: sewing blogs and magazines, instructors at fashion design schools and our 12+ years of selling new and used versions of the dress forms described below.

Many of the products described below can be purchased here on the sewing dress forms section on the Mannequin Madness website. 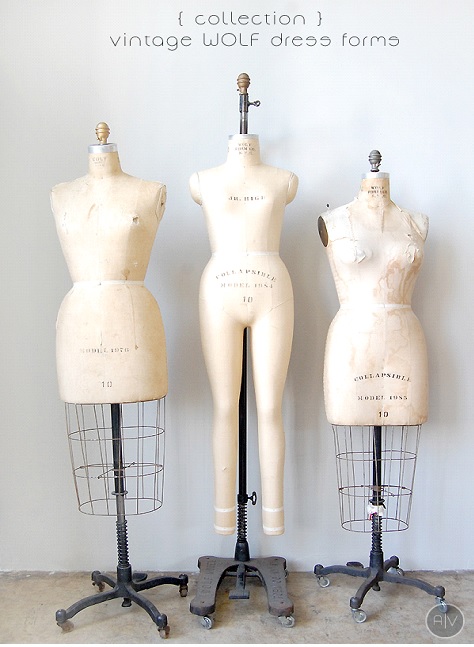 Not all sewing dress forms are created equal even though they may look alike. It’s kinda of like buying a car. All brands of cars have four wheels, an engine, seats and a steering wheel — but there are big differences in quality, durability, style and added features.

A sewing dress form which you can find will have these features:

Many new to sewing refer to this item below as a dress form: 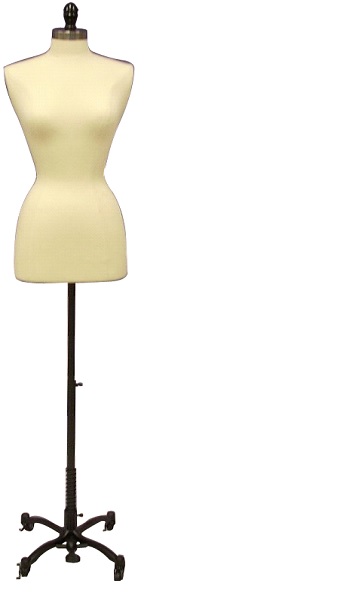 It is a display form (sometimes called body form) which is designed to resemble a sewing form, but it is NOT.

This form is for displaying clothes in a retail environment or online — NOT for sewing.  The foot pedal on these forms is decorative only. You adjust the height of the form on the stand by a knob underneath the form.

Technically, since you can pin into the jersey cover (it has styrofoam underneath), it can be used for sewing. This is why parents often purchase this  form for their teenaged child who wants to be a fashion designer.

But it is not designed to take the heavy duty pinning required in sewing garments. These are “partially” pinnable meaning they  will only hold pins at an angle.

A sewing dress form has a much thicker layer of foam padding which is beneficial when sewing or tailoring.  It can accommodate the direct insertion of pins to hold fabric.  And a sewing dress form is a full scale, anatomically correct version of the human form. A display form often has body measurements that are not anatomically correct because they are designed to make clothes look good.

Professional sewing forms are prized in the world of design for their versatility and durability . Wolf Dress Forms  located in Englewood, New Jersey is THE industry leader when it comes to dress forms but they went out of business in 2006. Their dress forms were hand made which is why they were so durable.

From time to time we acquire  gently used Wolf Dress forms that we recycle from the tailoring departments of retail chains. You can sign up here to be notified the next time we get some in stock. Often these NEVER make it to our website because people on our mailing list buy them up first. But we do frequently get used mini wolf forms which you can find here.

An authentic Wolf form will have markings like this: 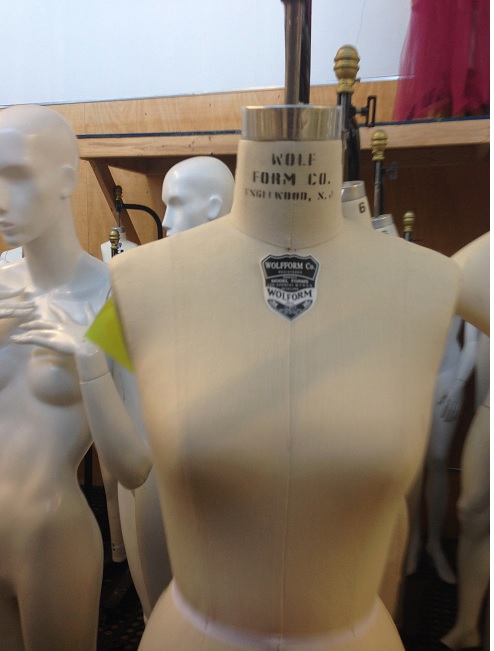 The company name is imprinted at the neck (or on the stomach, and sometimes the back) And there will be a sticker with the company logo (which often falls off after awhile so if you are buying a used Wolf form you, it might not have the logo). The year it was produced and the size for the form is also printed on the form. 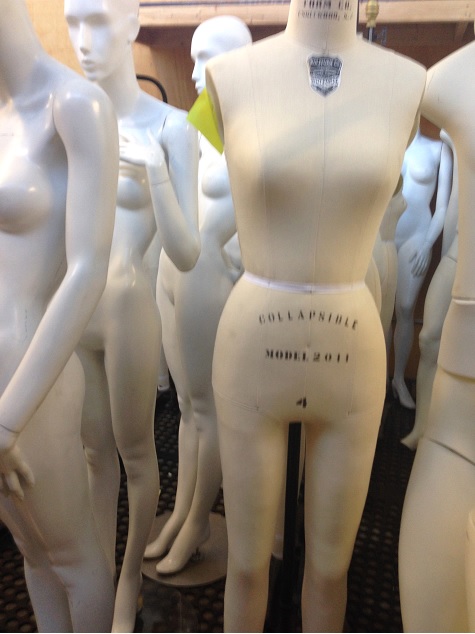 And the stand for the hanging style dress forms look like this: (Notice the Wolf name). 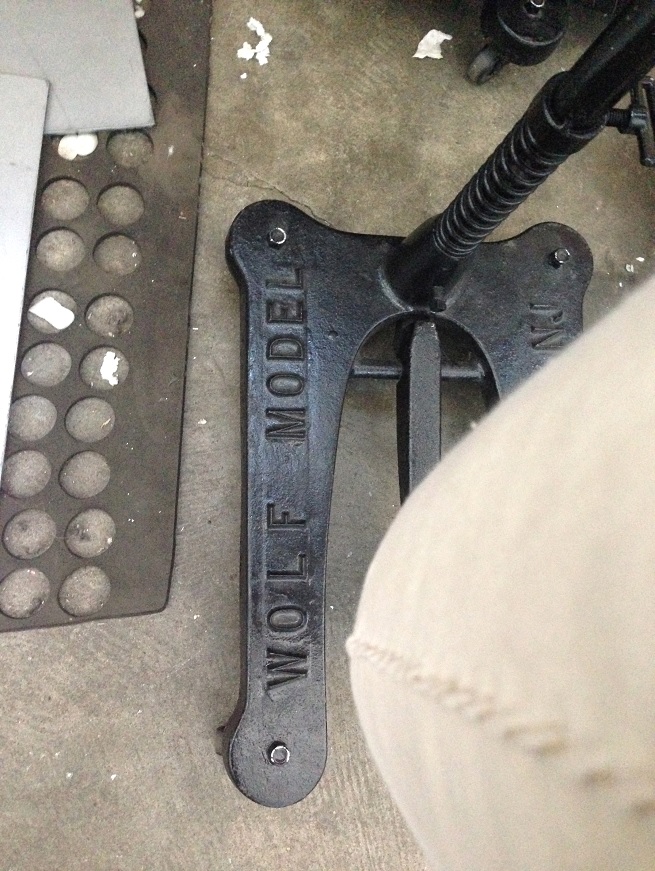 People who don’t even sew, will buy a Wolf form as an art piece in their home or to display in a store.  So that is why even an old ratty, tatty used Wolf form is expensive. They are collector’s items.

Once again if you want to be notified the next time we get Wolf forms in stock, sign up for our email list here.

Other professional sewing forms that are close to the caliber (and price) of Wolf forms are Alvanon and Royal. PGM forms are the brand of choice for many designed based reality tv shows.

Professional dress forms from made by  Roxy are much cheaper than the brands listed above because they are made by machine, made in Asia and are made with less expensive parts e.g. a metal or aluminum base versus a cast iron one.

Back to the car example, it is like comparing a Mercedes (Wolf) with a Toyota (PGM) or a Hyundai (Roxy).

Roxy dress forms  are ideal for people who want the vintage style look and features of a sewing dress form but will be using it for occasional (versus heavy) sewing projects or for display needs. Say you want to use it in your bedroom room to display a favorite garment or jewelry. 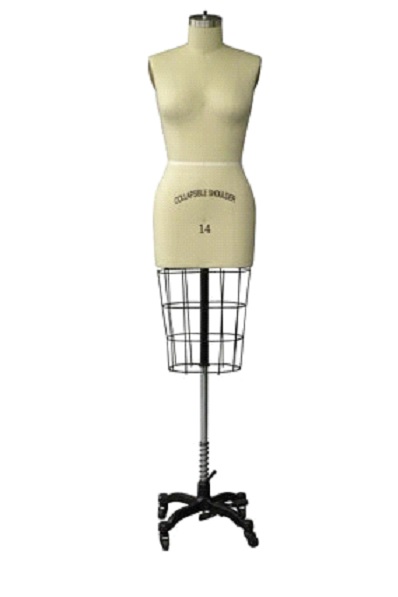 Half Scale forms —  These are scaled down versions of the full size dress forms. Very popular with fashion students and designers to use for creating design prototypes. It provides a pinnable cloth surface with seams to practice draping and designing at a fraction of the price of what a full-size sewing form would cost. 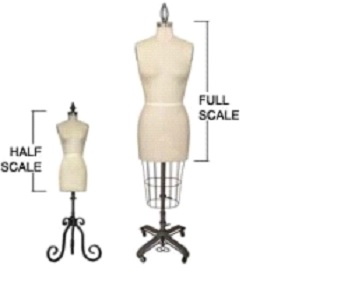 And we have ancillary items for these forms like mannequin arms for sewing forms….

Lastly, a word about adjustable dress forms. We don’t sell them because we have heard too many mixed messages about them. We recommend the Fabulous Fitting system adjustable pads instead to customize or enlarge the size of your dress form. 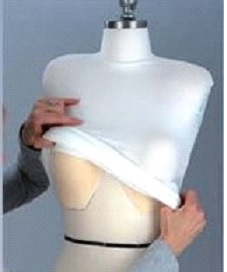 But since so many people ask about adjustable dress forms, here is a description about them from the blog  Sew Mama Sew. Because the main advantage of a dress form is having an exact replica of a human body to stand in for a model at all times, a custom made dress form that will mimic your exact measurements would obviously be ideal.

But before dropping a boat load of cash on a custom option, consider the wisdom behind such an investment. Human bodies change all the time. Static dress forms however, keep their figure no matter what.

So, if you are a serious designer with a fluctuating body, adjustability will be a key feature. Luckily, there are many innovative options available on the market for the inescapable reality of weight gain or loss. Models such as the Prym-Dritz Twin Fit and My Double dress forms feature measurement dials that allow designers to adjust critical points like the bust or hips as necessary.

While these dials are super helpful for adding or nipping a bit here and there, they can pose a significant fitting and pinning problems because of the gaps and edges they create.

If this article was helpful to you or if you have other questions, let us know. Please share article this with others.