I recently came across a series of articles about the history  of mannequins written by Tove Hermanson, editor of the Costume Society of America. It was a long article, so I have in into two sections, the history of mannequins prior to 1960 is below and after 1960 is here.

The Dutch word manneken literally means “little man,” though most mannequins were and are technically female forms. As the history of dress dates to ancient times, so does the history of dress forms; a wooden torso was found near a clothing chest in King Tut’s tomb, dating to approximately 1350B.C.: 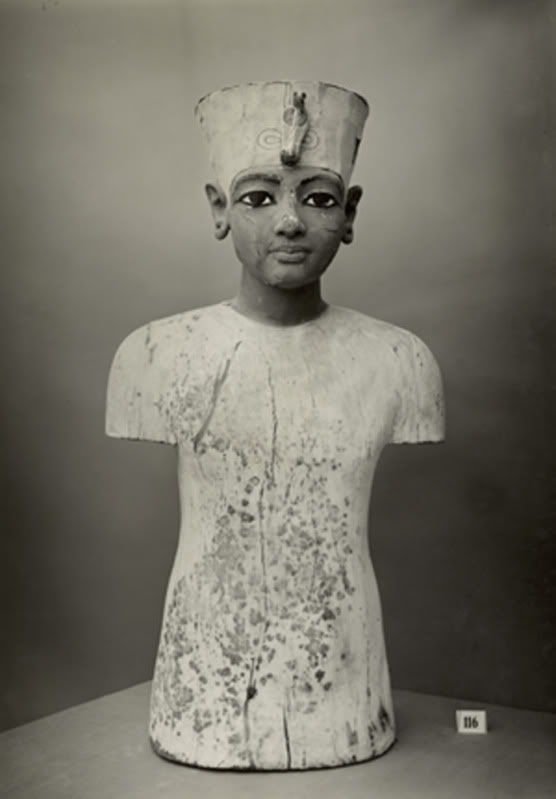 Thousands of years later, European monarchs produced “fashion dolls” as examples of national style — Charles IV of France sent one to Richard II of England in 1396 as part of a peace negotiations. And Henry IV of France (1553 – 1610) dispatched miniature, elegantly attired dolls to his fiancée, Marie de’ Medici of Florence.

Caroline Weber goes into amazing detail about the deliberate Frenchification of Austria-born Marie Antoinette in her book, similarly to update her on French trends and therefore facilitate her connection to her stylish adopted land and people.

Monarch aside, these miniature models were used to spread the latest trends across countries throughout the 1700s. But it would take technological advancements to move the dress form from private doll to public display item.

The mid-19th century inventions of electricity-fueled incandescent light bulbs and plate glass enabled merchants to create window displays to advertise their goods. Add the ease and speed of manufacturing ready-to-wear clothes afforded by the invention of the sewing machine, and it becomes obvious why the mannequin became a standard display prop at this time, surpassing its initial dressmaker’s functionality.

The department store established itself in the American way of life by 1910, and these larger businesses had more money to invest in expensive mannequins which would ideally help them move the quantities of merchandise they needed to.

Facial expression and body language became increasingly important (ancient and pre-Victorian forms were often headless) as window dressers like L. Frank Baum (known for his masterpiece The Wonderful Wizard of Oz, 1900) used them to create arresting vignettes on their mini stages. “

The latter company even began to produce sitting figures, bicyclists and representations of celebrated athletes at the end of the 19th century (see my post on Bicycles and Athletic Fashion). Sometimes with glass eyes, realistic teeth and human hair, attempts to make early mannequins more lifelike ultimately resulted in creepiness. Iron feet stabilized their teetering skeletons but contributed to unwieldy heft — they could weigh up to 300 pounds.

Skin-mimicking wax had the downside of melting under hot electric lights and cracking in cold winters. Subsequent mannequins constructed of plastic and papier mâché were more durable, lightweight, and flexible, making them easier to imbue with lifelike gestures.
Compare this 1909 storefront…

to one from 10 years later. Note the increased interaction between mannequins, the more sophisticated, narrative scene:

The 1929 stock market crash garnered invention in many ways. In the teens and early 1920s mannequin facial expressions became more animated, perhaps a reaction to silent films. Khol-rimmed eyes, bee-stung lips and razor-thin eyebrows that gained acceptance and popularity on the silver screen were transcribed onto new mannequins.

Made with papier-mâché, the new material shed off about 100 pounds, coincidentally embracing the more slender female form, often with Mannerist-like elongated necks.

In 1925, Siegel & Stockman, Paris startled the display industry with abstract mannequins in 1925 that mimicked the clean lines of Art Deco. Siegel himself said “The old mannequin, too realistic to respond to the abstract form assumed the architecture and decoration, could no longer fit into the window display with its effective and sober luxury as it is now conceived.

This basic conviction prompted me to make an appeal to a new form of expression in order to bring about a timely rejuvenation and modernization.”

Author Nicole Parrot observed the “elegant and snooty” look of the 1920s were replaced with the “pert and gamine” look in mannequins during the Depression of the 1930s. An Austrian dollmaker-turned-mannequin manufacturer, Kathe Kruse, devised a metal skeleton that was covered with a skin-like material, enabling a variety of positions.

“Cynthia” was a 100-pound model created by Lester Gaba in 1932 who had realistic imperfections like freckles, pigeon toes, and even different sized feet. Gaba posed with Cynthia around New York City for a Life Magazine shoot that humorously demonstrates how lifelike the mannequins had become:

Tragically, Cynthia met her demise when she slipped from a chair in a beauty salon.

The more severe mannequin expressions reflected the unease and hardships of WWII. As a fashion historian I already knew that the dress silhouette in the 1940s became slimmer and less embellished to waste less fabric, due to raw material shortages and wartime rationing.

I only recently learned, however, that mannequins themselves were made to be shorter than the 1930s models, with the same goal of conserving precious resources for the war effort. At the war’s conclusion, Mayorga Mannequins introduced “Welcome Home Mannequins” where a man and woman held their hands outstretched towards each other, while a small girl looked expectantly at her father.

This narrative was tempered by glamorized Hollywood poses that were also available, but traditional family values (including consumerism) continued to be recreated in storefront vignettes:

This article will be continued shortly in Part II…