Picking up from where I left off last week, I’m going to address mannequins’ evolution in the second half of the 20th century.

The revolutionary ’60s came as a shock to the world, the American youth rebelling against the traditions of their conservative parents who desired normalcy and stability after the chaos of WWII. The FDA’s approval of birth control pills in 1960 beckoned the sexual revolution; free love challenged the marriage-monogamy favored in the ’50s, women took charge of their bodies and their careers outside the home. After the post-war homemaking scenes enacted in ’50s storefronts, the next generation of mannequins aimed to capture real women rather than idealized versions of them… to a greater extent, anyway. Adel Rootstein’s company produced mannequins based on living, iconic people such as Twiggy (seen below), Patty Boyd, and Sandy Shaw, creating a secondary kind of functional pop art: 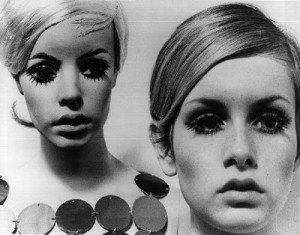 These mannequins were designed with increasingly kinetic stances, reflecting the growing obsession with youthfulness and freedom of movement (this could include freedom of professional sphere as well as freedom from more restrictive garments).

The 1970s saw more ethnic diversity in mannequins; Decter of Los Angeles presented it’s Reflections VII collection with Asian and Black mannequins “walking” arm in arm. There was greater attention to anatomical accuracy too, specifically nipples. As short and mod ’60s fashions evolved to the long, flowing, backless or see-through styles of the ’70s, structured bras were worn less by live women and mannequin nipples more realistically displayed these braless styles. Capitalizing on the “natural” look, VIVA Lingerie even had a nipple bra that had padded nipples with the “support you want” (hilarious!): 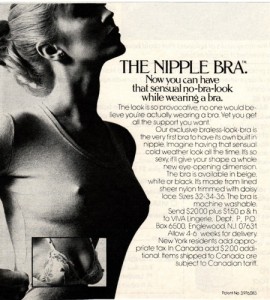 In the same vein of growing skin exposure, as the fashionable waist was lowered from the natural waistline to the hipline, the torso joint of mannequins’ upper and lower halves was likewise lowered, to display bikinis without the distracting visible split line.

The recession of the early 1990s led to minimalistic, abstract fashions, and also mannequins that still looked good in simple (cheaper) settings. Headless mannequins had the bonus of being politically correct (no ethnicity = every ethnicity) and era unspecific, with the bonus of eliminating time intensive makeup and hair styling. 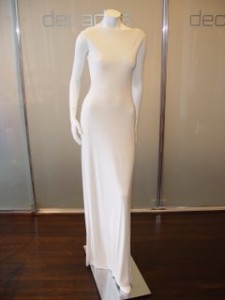 Plus-size, juniors and maternity fashion were finally recognized as a significant part of the fashion industry and so mannequins were built with a wider variety of shapes and sizes to cater to these growing markets. Below are mannequins with larger-than-usual butts for those with a Jennifer Lopez shape, commonly seen in my former ‘hood, Spanish Harlem: 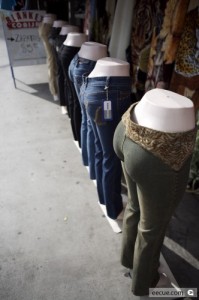 And mannequins have inspired fashion designers themselves in an interesting reversal of influence. Aminaka Wilmont created a trompe l’oeil dress that mimics a mannequin on a dress (that I desperately want to own, by the way): 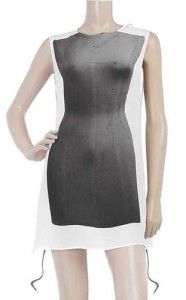 And on that note, I’ll leave you with yet another cliff-hanger (it’s a stretch, I know): next week I’ll look into the relationship between mannequins and fine art, which is my personal favorite part of this story!