Saturday, June 8 is International Yarn Bombing day. What is Yarn Bombing? Yarn bombing is a type of guerrilla or graffiti knitting, a kind street art that employs colorful  displays of knitted or crocheted yarn or fibre, rather than paint or chalk.

Here are photo’s of yarn bombing projects that involve a mannequin or statute as well as a little history (in italics) about yarn bombing courtesy of Wikipedia.

1  Love this mini-cooper being driven by a mannequin! 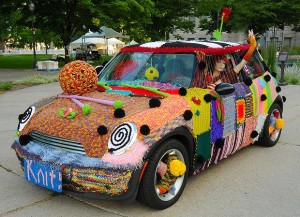 While other forms of graffiti may be expressive, decorative, territorial, socio-political commentary, advertising or vandalism, yarn bombing was initially almost exclusively about reclaiming and personalizing sterile or cold public places.[2] It has since developed with groups graffiti knitting and crocheting worldwide, each with their own agendas and public graffiti knitting projects being run.

2 This is a statue of Albert Einstein which was yarn bombed. 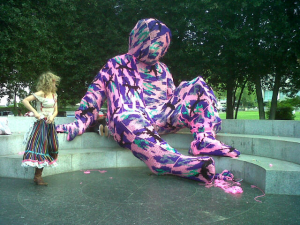 Yarn bombing examples have been recorded as early as May 2004 in Den Helder, Netherlands. One year later in the U.S., Texas knitters used their leftover and unfinished knitting projects, but it has since spread worldwide with custom pieces being created by artists.

3 This is one of our wire dress forms that many knitters use to store their yarn for their future yard bombing projects.

The start of this movement has been attributed to Magda Sayeg, 37, from Houston, who says she first got the idea in 2005 when she covered the door handle of her boutique with a custom-made cozy.Though artist Shanon Schollian was knitting stump cozies in 2002 for clear cuts in Oregon.The Knit Knot Tree by the Jafagirls in Yellow Springs, Ohio gained international attention in 2008.

4 These plus size dress forms were used to decorate the entryway of a venue at a knitters convention where yarn bombing was one of the topics. By using plus size forms it provide a large canvas in which to display the yarn. 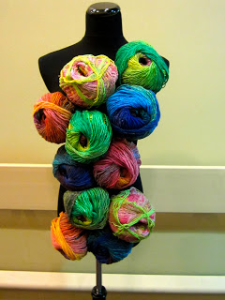 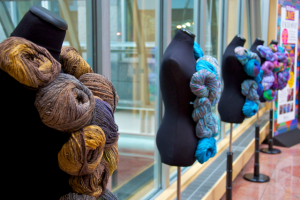 The yarn bombing movement moved on from simple ‘cozies’ with the innovation of the ‘stitched story’. The concept has been attributed to Lauren O’Farrell(who creates her street art under the graffiti knitting name Deadly Knitshade), from London, UK, who founded the city’s first graffiti knitting collective Knit the City.

5 This is a mannequin we have in our garden holding a Christmas ornament made out of yarn that we recycled from department store. We put the rest of the yarn ornaments in the fig trees in our backyard and the look really cool. 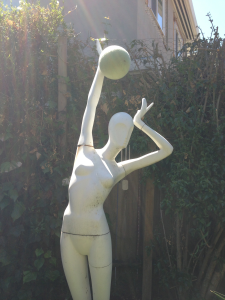 This blog post has examples of ambitious yarn bombing projects from all over the world like this bus which was done by women in Dubai. And of course there are a ton of yarn bombing boards on Pinterest. 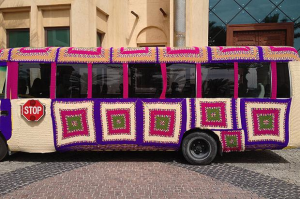 We love these yard bombed benches. 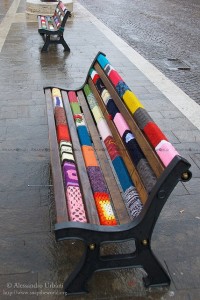