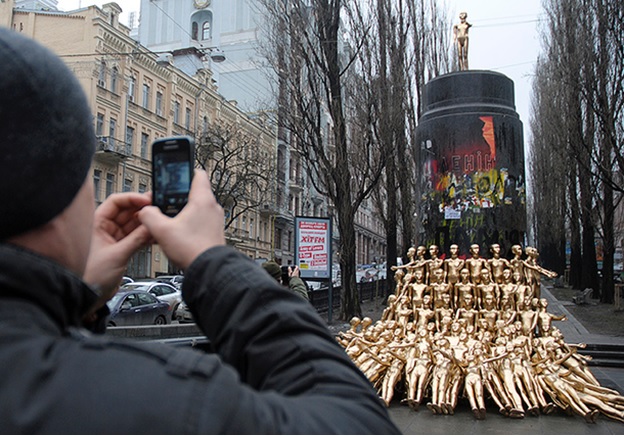 Shevchenko Boulevard was torn down by pro-European protesters, artwork has flowered on the spot.  About 100 gold-painted child mannequins were installed at the base of the monument.

The plastic child mannequins are positioned around the front side of the monument, while one mannequin stands on top of the pedestal. The dummies are attached to the pedestal with thin ropes, one row above another, each having left arm stretched forward.

However, some Kyivans see a sadder drama in the installation. 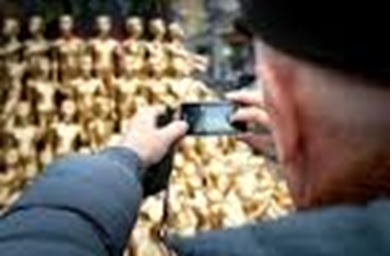 “I think this is linked to the Lenin’s concentration camp. You know he was the founder of the Solovki camp and those (mannequins) might be depicting his victims,” says pensioner Lidia Ivanova, a Kyiv native.

Ivanova says she is happy that Lenin is gone and his place was taken by modern art.

“I believe Lenin should have been taken down back in 1991. While those Soviet monuments are in their places, the nation won’t be reborn,” she said.

The artist says her installation has nothing to do with Lenin.

“When I came here Lenin was already gone, so I just got to work with an empty base,” Voitovych says.

The artist doesn’t want to talk about the cost except that it was “quite expensive” and that the money came from a sponsor.

Preparing the installation took Voitovych and her friends about two weeks.

“I know there are (toppled) monuments like this in Sumy and Mykolaiv and in other cities, so soon I think, children will occupy empty pedestals all over the country,” she says.