Mannequins are often used by retailers to bring attention to a social or political cause. For example, Vivianne Westwood had a window display to bring awareness to domestic violence.

In West Hollywood, ES Collection, a menswear boutique that sells swimwear and athletic clothing, had this display about HIV. 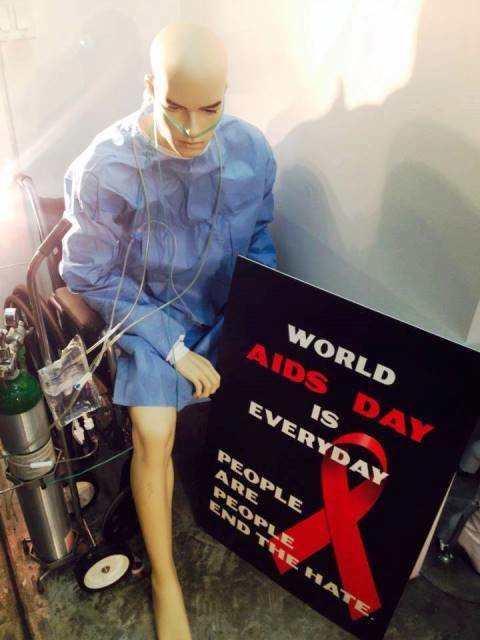 The store has installed a bald-headed mannequin in a wheelchair in the front window. The mannequin is dressed in a hospital gown and hooked up to an oxygen tank and IV line, depicting a man in the final stages of AIDS-related complications. It’s a scene straight from the 1980s and ‘90s, but its one that store owner NIr Zilberman says we shouldn’t forget.
To that end, Zilberman has orchestrated Fighting for Our Lives, a candlelight ceremony tto both honor those who have died of AIDS complications and to support those community members still living with HIV or AIDS.
“This community has become lax in its fight against HIV [and] AIDS,” says Zilberman, fashion designer and owner of two Los Angeles-area men’s retailers, ES Collection and LA Jock, who is organizing this weekend’s rally. “We don’t remember the millions of people who lost their lives to the disease. We forget the discrimination; how heterosexuals blamed the gay community for AIDS; and how many doctors refused to treat AIDS patients.”