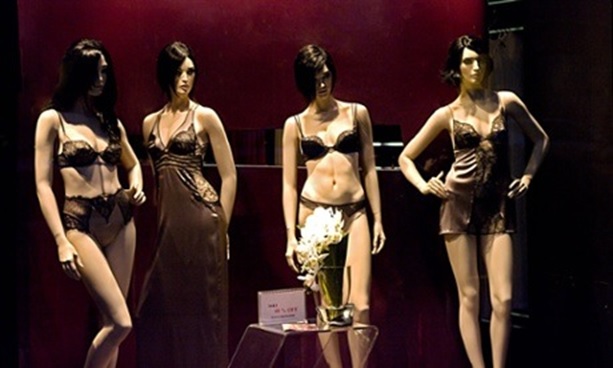 With the start of summer comes the tradition of: swimsuit shopping, skimpier clothes – and with them, a host of body issues.

So who wants to look up into a store window and, already dissatisfied with one’s body, see a mannequin with a concave stomach and visible ribs?

Does that spur the impulse to buy out of aspiration? Or is it a turnoff?

La Perla apparently thought its chic customers – who drop hundreds of dollars on high-status underthings – would relate to, or admire, such a vision.

It didn’t quite work out that way. “How does #LaPerla think ribs on a mannequin is ok?! @SethMatlins,” fumed influential tech entrepreneur Michael Rudoy on Twitter, tagging truth-in-advertising activist Seth Matlins.

Score one for Matlins. La Perla quickly removed the mannequins, and tweeted that they wouldn’t be used in another La Perla boutique. The company added that it is updating its entire mannequin collection.

“The mannequin photographed has been removed from the store and will not be used again by any La Perla boutique. We are in the process of redesigning all La Perla stores with a new concept image and the mannequins that are currently displayed in our US stores will no longer be used. We appreciate and value everyone’s comments, thank you for bringing this to our attention.”

Yet La Perla is not a one-time offender – several weeks ago the lingerie company’s Instagram featured a model beside a mannequin with impossibly skinny legs.

“I think it is much worse to have their ribs showing,” said Jean Kilbourne, a former model and honorary member of Wellesley’s Centers for Women.

But even Kilbourne will tell you: “The extremity of it catches our attention, but this is really not new.”

In fact, it’s becoming more of a trend: expect the impossibly slim, the white and the sinewy to dominate chic windows.

Typical mannequin measurements, excluding the very chesty or bootylicious, are an almost impossible ideal: around 6ft tall, 34in bust, 24in waist, 34in hips.

Two large mannequin suppliers said their most popular color is alabaster white, although it used to be “flesh tone” – that is, flesh-toned if you are white. And both said their clients’ desires are trending toward more “sculpted” mannequins that show off “musculature”.

“If you do something that’s sort of a thinner mannequin, you’re doing that one group that says it’s too thin,” said Goldsmith’s creative director and CEO Dan Evans. His company supplies mannequins to many high-end department stores, including Nordstrom, Bergdorf Goodman and Macy’s. Evans has also worked with La Perla.

The enduring best-seller of Goldsmith’s collection, he said, is the “classic” mannequin. The very detailed female model doesn’t have visible ribs; instead, she has six-pack abs.

“Most people are looking at the garment, and not what the mannequin represents,” said Barry Rosenberg, partner at Mondo Mannequins, which can produce up to 2,000 mannequins a day.

“I mean, I’m not going to tell you anything you wouldn’t already know. Why are models 6ft tall with small breasts, and extremely long legs? Because they look the best in the garment,” said Rosenberg.

Rosenberg laughed at the description of the possibly too-skinny ribby mannequins.

The average American woman is 5ft 3in and 166lbs, according to the CDC. 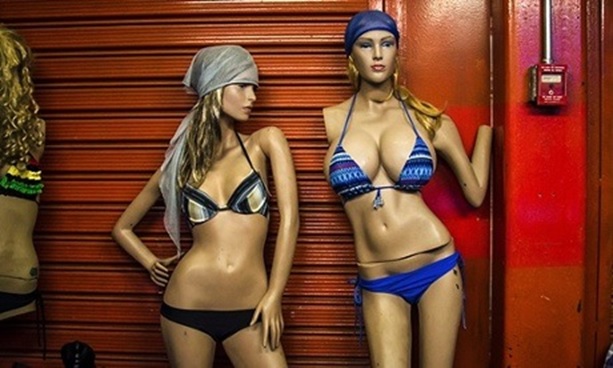 Goldsmith’s Evans suggests it’s not his choice. “At that point, the fashion industry and our customer dictate those sizes,” he said.

The trend is towards thinner and ribby mannequins promote unhealthy body image, as many truth-in-advertising advocates will tell you.

“It’s bad enough that they’re so thin,” said Kilbourne. “It makes them look even more anorexic. Having the ribs showing is a sign of starvation, malnutrition, eating disorders. It’s appalling,” she said.

“One of the big – and I’ve been talking about this forever – is it all becomes invisible in a way because we’re so used to it, and if its brought to people’s attention, that sort of breaks through the clutter,” said Kilbourne, the body-image advocate. “I think it’s pretty freakish for ribs to be showing.”

Reprinted from the Guardian in the United Kingdom