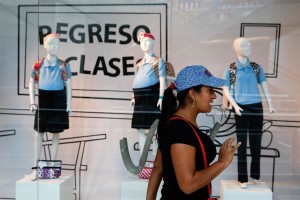 A woman reacts in front of a display showing mannequins of pregnant schoolgirls at a shopping mall in Caracas on Wednesday. The display is shocking shoppers and stirring debate over sex education in Venezuela.

Teen-pregnancy education might be happening in schools, or maybe on MTV (depending on what your opinion of the Teen Mom series is), but a new campaign in South America is trying to reach kids where they think they’re really attuned: at the mall. 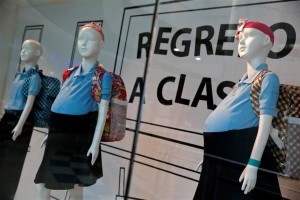 This is not the first time that mannequins are used in a display to draw attention to a social issue. For more examples see this board on Pinterest on Socially Conscious Window Displays.

In Caracas, Venezuela, two charity groups attempting to lower teen pregnancy rates have installed a display of pregnant teen mannequins in a shop window at the local mall.

The girls are wearing backpacks, the school uniforms all students under age 15 in the country do, and large bellies.

Not everyone is open to the message. “I think it’s horrible, awful,”Kelly Hernandez, 18, told Reuters as she looked at the display. “If I was a mother, I wouldn’t want my child to see that.”

Others said, despite the shock of the image, they appreciated what the campaign was trying to do.

“Yes, it’s disturbing to see in a window,”Auriselvia Torrealba, 20, according to Reuters. “But it’s the truth. You see pregnant girls all the time on the streets. So this forces you to think about the problem, doesn’t it?”

According to the charities, the adolescent pregnancy rate in Venezuela is one of the worst in South America, with one girl under-18 becoming pregnant every three minutes (and 23 percent of all births being to mothers under 18).

Still, the U.S. teen birth rate is higher than that of many other developed countries, including Canada and the United Kingdom.

The two groups responsible for the display in Caracas, Fundana and Construyendo Futuros, have said they’re pleased with the controversy and publicity around it.

“It’s amazing seeing people react as they walk by,” Construyendo Futuros president Thalma Cohen said to Reuters. ”This is such a taboo subject in Venezuela, we want people to talk about it.”