Yesterday we posted photos of four of the best non-traditional holiday window displays in New York, and here are four more. Once again our criteria for judging is

We do this because we want to encourage more retailers to make their window displays more appealing. Good visuals = more sales. Too many retailers just display goods in the window, thinking that this is enough to draw people in. You have to create a “emotional connection” and that takes creativity and good lighting, props, signage and mannequins.

Case in point, check this photo and the text below which explains how this independent retailer’s holiday sales broke went up dramatically when they put more effort into the visuals in their window than they normally do. I took this from Racked, one of my favorite websites about “shopping and style intelligence” (their words) 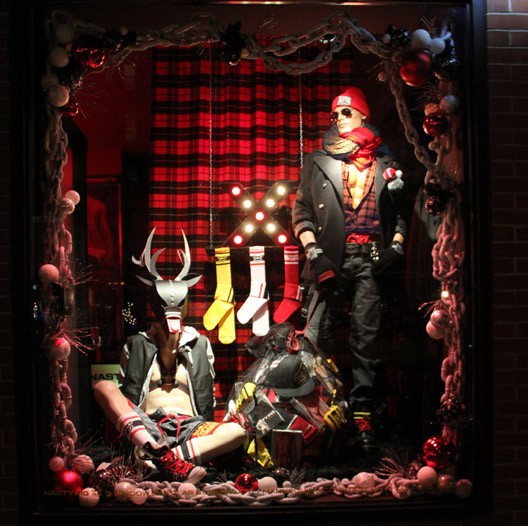 Nasty Pig sells a combination of casual men’s clothing and fetish gear, so it makes sense that their Christmas windows are just a tad kinkier than the usual holiday display. Stylist Polar Buranasatit dressed two Rootstein mannequins as a beardless Santa and his harness-wearing sidekick Rudolph. Then he surrounded them with frosted chains and added a cheery seasonal backdrop of tartan to complete the look. Inside the store, you’ll find more plaid, as well as a fur-trimmed cashwrap and a couple of Santa’s little helpers modeling Nasty Pig’s street wear.

According to the head of the company, the eye-catching windows are paying off. “Nasty Pig hasn’t really been seen as a place to do all your holiday shopping. That certainly changed this year,” he said in a statement. So far, November and December sales have broken records for the store, which means a lot more guys than usual are going to find rubber in their stockings this Christmas.

Here is another example, proving our theory that even stores that don’t sell clothing, can use a mannequin every now and then.

Apple stores really don’t need to do much in the way of visual merchandising their windows, since their products sell themselves. This is an idea that other stores that sell electronics should implement.

This is a holiday window display from our archives. It is from Anthropolgie. Although it does not have a mannequin (but a mannequin would greatly enhance it) we like it because it reuses recycled materials (the igloo is make of used water jugs) and relatively few props (a clothesline, fake heater and ice bags). This type of display can work for a variety of items – lingerie, clothes, shoes, towels, etc. And it relevant for beyond the Xmas season but for all winter. 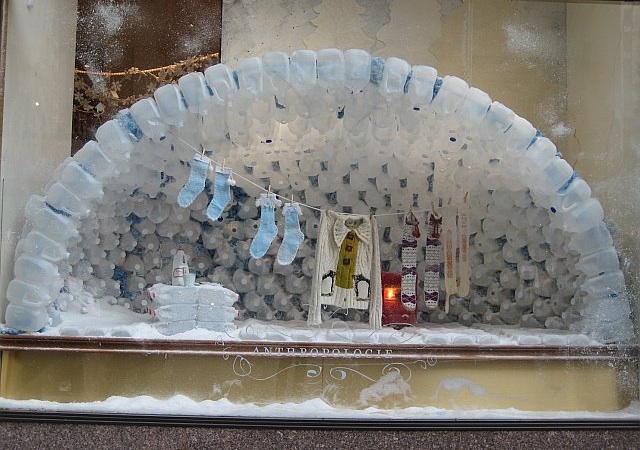 Just found this article today. I was the one who did the holiday window for Nasty Pig. Thank you so much guys for thinking the window display I did was one of the best non-traditional holiday window in NYC in 2010! 😀