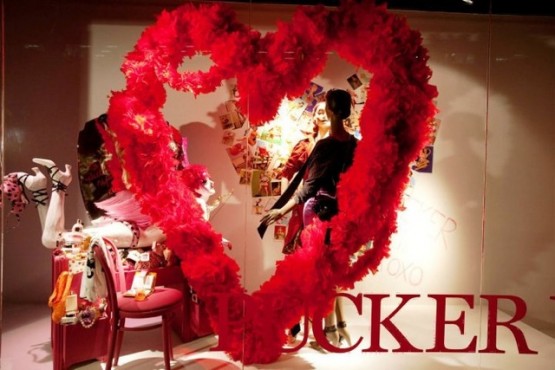 One retailer is taking a cue from the growing social acceptable of gay and lesbian relationships, and now has a Valentine’s window display that features not one, but TWO gay “couples” in their window display.

It is rare to see a window display (outside of the Castro in San Francisco or Key West Florida) that celebrates gay lifestyles, but even rarer to see this in a window of a mass market retailer.

Check out these two window displays from Holt Renfew, an upscale retailer in Canada. First here are two male mannequin posed arm in arm. The heart bubble above them says” stop him in his tracks” I guess the silver mannequin is supposed to be the Tin Man and the other mannequin is a male Dorothy ( gingham shirt, basket in hand and ruby red pants to represent ruby slippers) 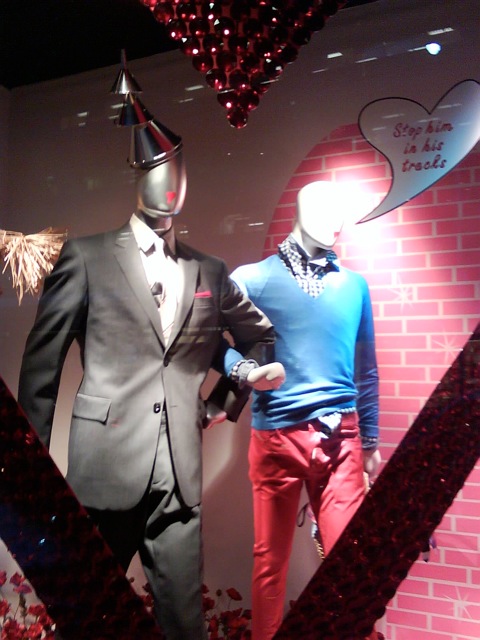 I guess it would have been asking too much for both of the mannequins to have realistic faces as opposed to blank faces and to not have the reference to the wizard of oz. But that is a small quibble, because Holt Renfrew gets big props for even doing this at all.

Maybe it is because of the Oscar buzz that the movie “The Kids are Alright” is generating, the second window has two lesbians, very subtle but implied nevertheless. The snapshots in the background are all of women in swimwear of lingerie. 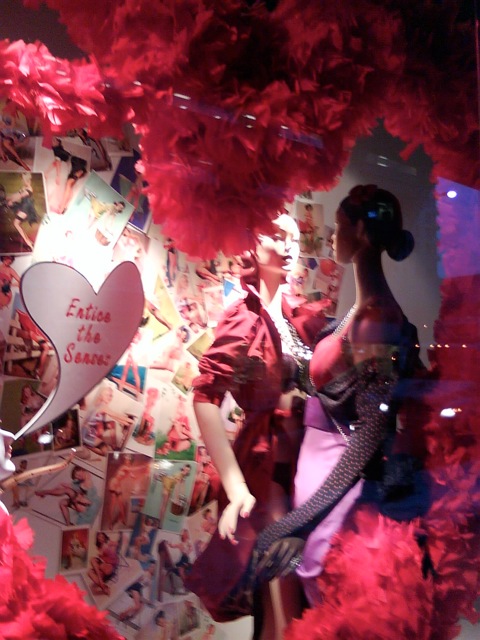 The heart bubble says “entice the senses,” and the two females are not quite cheek to cheek but definitely breast to breast. And it appears as if they are two different ethnicities, which would make them both a lesbian and an interracial couple. Another rarity in retail window displays!

Very few retailers create window displays that make any type of social statement, aside for something like putting pink ribbons on mannequins during breast cancer awareness month. We think it is admirable for Holt Renfrew to realize that Valentine’s Day is not just for straight customers.

And by doing so they accomplished what every great window display is supposed to do – to get people to stop, look and tell others about what they saw. The word of mouth this generates ultimately gets more customers to come inside the store. This is just one example of how to think outside of the box to create a window display that stands out from the “sea of sameness” from other store window displays to gets noticed.

Mannequin Madness has a large selection of straight, gay and lesbian mannequins available for purchase or rental 🙂 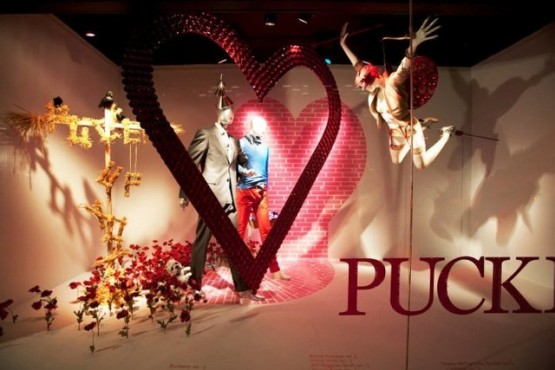 Obtain a local Board Certified Plastic Surgeon and Investigation Procedures around the Breast Enhancement Internet Directory.