Today I am going off topic and not writing about mannequins.  Instead I am seeking feedback from anyone who reads this on:  how to maintain a relationship with someone whose political views are extremely polar opposite of your own.

A long term friend of mine (see photo of the two of us below) recently revealed that she is a Trump supporter. While I always knew her political views were more conservative than my mine, this hadn’t  interfered with our friendship before. But being a Trump supporter could be a deal breaker for me. 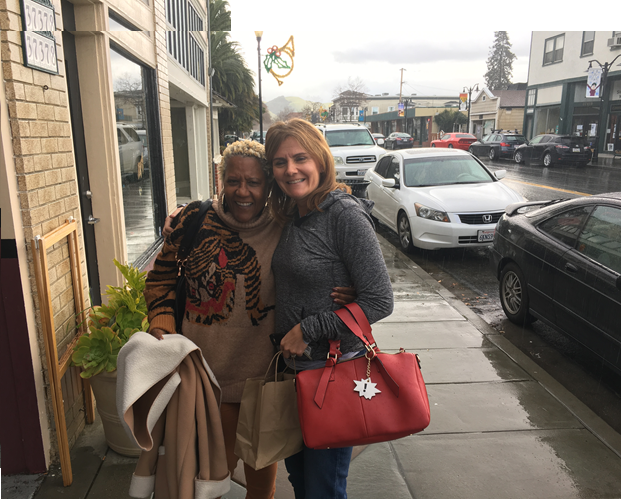 Since I work with mannequins all day, I don’t have too worry about discussing anything controversial in the workplace. My mannequins are non-plussed about anything I say or how I say it.  So my skills in having dialogue on emotionally charged issues are a bit rusty.

My friendship with Peggy O’flaherty,  is challenging me to learn how to have meaningful dialogue with someone with a widely different on issues that are important to me.  It’s not like we are debating which pizza is better -Chicago style or Sicilian.  The topics we might debate could potentially cause a friendship spanning over 20 years to implode.

Let’s talk about our friendship for a minute. According to Wikipedia the definition of friendship is:  a relationship of mutual affection between people. While there is no practical limit on what types of people can form a friendship, friends tend to share common backgrounds, occupations, or interests and have similar demographics.

Based on Wikipedia’s definition it is hard to believe Peggy and I could ever be friends. For starters, there is an 11-year age difference between us.  But that is just the beginning of our differences.

None of these differences mattered in our friendship, in fact we loved learning about each other’s point of view and we felt a connection on a spirit level.

I asked Peggy to write her perspective on how we first become friends and what happened when we had a face to face meeting for the first time in over 20 years – one month after the 2016 election. She also is posting this on her blog.

In December 2016 we met at little cafe on the East Bay, just outside of San Francisco between Christmas and New Years.  It had been twenty-six years since I had seen my former co-worker, Judi Henderson Townsend.   She ordered her hot chocolate, and I wrapped my hands around a steaming hot coffee.  Judi and I spent two years working together at United Airlines during the early 1990s, in the midst of the Gulf War.  Operation Desert Storm was one of the first friendly debates we shared over the water cooler.   Having grown up in a small town in Illinois, my transfer to California at the age of 20 had brought me together with people of diverse lifestyles and cultures that surprised and stretched my midwestern small town values.  Judi might have stretched me the most!

My career in California was short lived I returned to my roots in Illinois, got married, had kids and became entrenched in our family life. As often happens, Judi and I lost touch.  But about 8 years ago, I happened upon an article featuring Judi in Oprah Magazine as a Rising Entrepreneur with her business, Mannequin Madness. 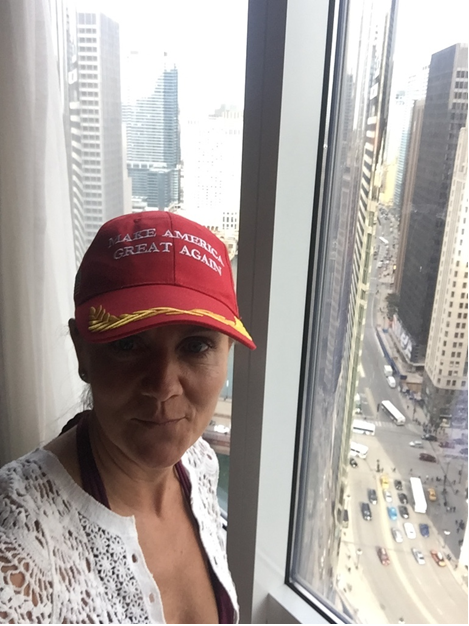 Judi had built her empire by rescuing mannequins and repurposing them as art or by giving them a second life in another retail outlet.  I was in the process of launching my own business, and reading about her success inspired me. Through the power of Facebook, we reconnected, and promised to stay in touch.

Our reunion at the little cafe on the East Bay was our first time seeing one another in over two decades, but we connected just like old times.  In the bustling coffee shop, Judi filled me in on how 2016 had many ups and downs for her, specifically the pain brought on by the recent election.

As she was sharing her views, it brought me back to the water cooler in 1991 — we were again on opposite sides of the political aisle, a topic I surely didn’t want to bring up for fear she may toss her cocoa in my face!

I say this in jest, but I wasn’t about to rock our time together with a heated political discussion.   Our conversation lead to topics of her business and mine, and although we have virtually nothing in common, we discovered we shared some deep connection that we could only label as a spiritual kinship.

Judi’s perspective on the friendship

When I worked at United Airlines, Peggy and I worked in different departments, but as we are both extroverts and were single women in a new city, we found ourselves drawn to each other. We frequently had lunch together and engaged in lively dialogue over the water cooler, but we didn’t socialize outside of work.

My desk was next to a man who came from a large Irish Catholic family. I hinted to him that he and Peggy had a lot in common, thinking that they too would become work friends. Next thing I knew they were secretly dating and then engaged. When I flew back to Peggy’s hometown in the midwest for their large wedding I felt like a fish out of water. I was the only African American and it was the first (and only) Catholic wedding I ever attended.

Peggy and I stayed in touch for a while, but when she and her husband settled permanently  in the midwest, we gradually lost contact. (This was pre-Facebook days). Then several years ago,  out of the blue, I got a call from Peggy. She was in the hospital recovering from having her fifth child and was indulging in a luxury she rarely got  to do while at home — reading a magazine!.  While paging through Oprah Magazine, she had stumbled across an article about women entrepreneurs (and my photo).

I was shocked that she took the time to track me down and wanted to reconnect. I doubt I would have done the same if I was in the hospital having a fifth child!  As we caught up with one another, we marveled at how different our lives had become since the days we worked together: she was a stay-at-home-mom with an entrepreneurial spirit and I was married, childless and a running my own business. Because, the social media revolution had begun, we were able to keep our connection going through Facebook. When she became a Rodan+Fields consultant we talked a lot more often about being an entrepreneur.

Now, here we were, 20 years later meeting at a coffee shop. Our turbo-charged conversation covered every aspect of our lives and our hopes for the future.  Our worlds were even more different now than when we were co-workers, yet surprisingly I felt a closer connection with Peggy than ever before.

During our breakfast conversation, it never occurred to me that Peggy was a Trump supporter.  She mentioned that she missed the diversity in California and was excited that her children had expressed an interest in attending college in California. This would give her an excuse to come back here more often, which thrilled her. So I assumed she had a liberal point of view as diversity and Trump don’t go hand in hand.

While I knew her husband was very politically conservative (he liked Rush Limbaugh when we worked together), I was certain that as a woman, and a mother of 4 daughters, she would not, could not be a fan of Trump.  We didn’t talk about political issues specifically, but rather how the aftermath of this election had caused such divisions in society, leaving many people feeling anxious, hopeless, angry and conflicted. 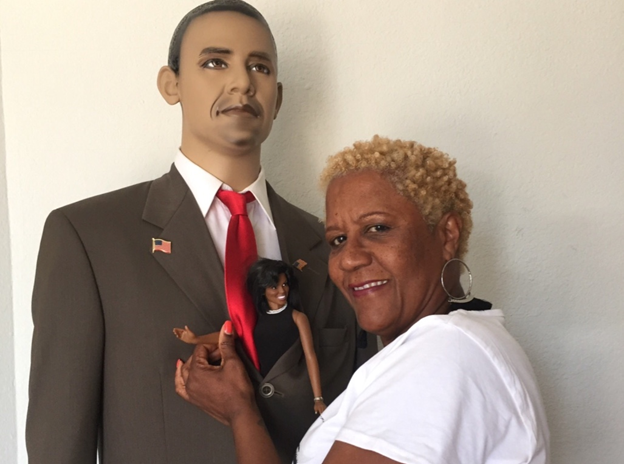 Note: That’s me with the President Obama mannequin I have in the foyer of my mannequin warehouse and that is a Michele Obama doll in his jacket pocket. Peggy didn’t vote for Obama in either election.

As we wrapped up our coffee shop reunion, we joked about our unlikely friendship, but realized we had a common thread.  We were both committed to nurturing unity despite differences, to finding goodness in the world and people, especially now at a time when healing and unity seems necessary.

“How can we live with a joyful and positive attitude during this time of turmoil?” we both asked ourselves.

Peggy had mentioned that she had planned to read “The Book of Joy: Lasting Happiness in a Changing World” by Nobel Peace Prize Laureates Dalai Lama and ArchBishop Desmond Tutu.

She was determined to have 2017 be a joyful year no matter what. Her enthusiasm made me want to read this book, and we decided to check in with each other in the springtime to discuss what we learned from the book and how we were applying it to our lives. 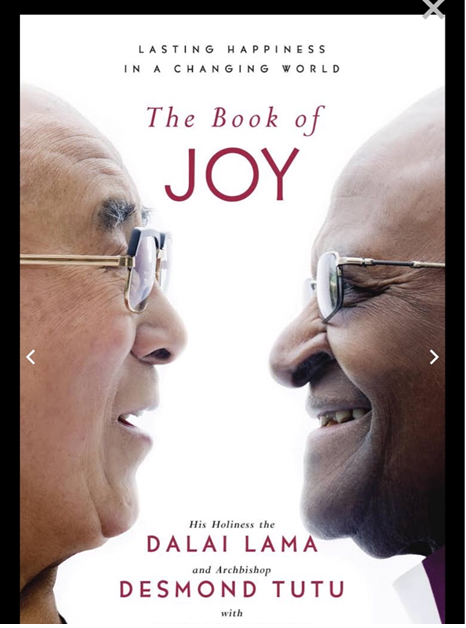 Well, life happens, and although I downloaded the book, I haven’t read it yet. Peggy has read a few chapters but not finished it. When I called her for our check-in and started ranting about Trump, that is when she revealed with me that she was a Trump supporter.

My jaw dropped. While I have some business clients (living in other states) who are Trump supporters, I have absolutely NO close friends who voted for Trump. In fact most of my friends participated in the Woman’s Protest March the day after the inauguration.

I began to wonder: would this be the tipping point that ends our unlikely friendship? Will Peggy un-friend me after one of my frequent anti-Trump posts on my Facebook page? Should I just ignore her politics and focus on the things we have in common? Are we more casual acquaintances than friends, so is her friendship worth keeping?

We’ve asked ourselves “why now, after all these years do we yearn to maintain this unlikely friendship?”   Innately we are drawn to the differences in each other at an emotional, intellectual and spiritual level.

We feel challenged to step outside ourselves and our own views, to expand our compassion and understanding, to respect the views of each other.  Knowing there are many more unlikely friendships in our midst, we decided to share our findings, experiences and ideas through a series of articles, maybe even live interviews to explore the common and yet divisive topics of religion, politics, race and lifestyles, in hopes of softening ourselves and bringing more kindness to our world.

We found the Heineken beer company tag line, “open your world” and commercial that ran across European airwaves very poignant as it illustrates having dialogue with someone of a polar opposite viewpoint.

So dear reader I ask you for your help and feedback. How have you maintained a friendship or a relationship with a friend or family member whose viewpoints are polar opposites of yours? Do you think we should refrain from discussing politics just focus on what we have in common? Or can we have a healthy debate without judgement?

I’ll end with this quote from a  Daisaku Ikeda  buddhist philosopher that I admire and whose wisdom I try to implement:

Dialogue is not some simplistic assertion of one’s own position, nor is it necessarily about persuading others to one’s point of view. Dialogue is about demonstrating respect for another’s life, and being determined to learn when confronted with differences in personality and perspective.”